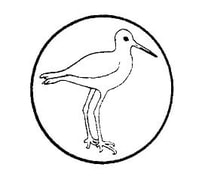 Thameside Lacemakers was born in 1979 and was the idea of Valerie Harris who was a local Lace Teacher.
She had three classes at Romford, Chadwell Heath and Grays. The first Newsletter to members was dated June 1979 and the first Balance sheet showed an income of £392.92 but an expenditure of £193.80 leaving a balance of £199.12. A healthy start!

​Thameside Lacemakers had few members at this time and Lacedays were organised in members' homes. It was felt that the group needed a Logo, so the first Christmas Competition was held to design such a Logo so that the group 'can be easily recognised'. The winner  was Mrs. Ann Smith who designed our Redshank after a suggestion from her son. Having designed it, she then set about making it in lace. She chose Bucks Point and this is the result.